Florence, Italy – Go beyond river Arno and meet the artisans of Oltrarno. Supported by A.I. – Artisanal Intelligence and curated by Alessandro Possati, the exhibition ‘Work Where’ was initiated to document and celebrate some of the hidden artisanal gems found in the southern district of Florence. It was no coincidence that the location chosen was Galleria Ceri, since it is at the heart of the artisans’ ateliers.

With a unique photography technique, eight craftspeople were documented in a timeless frame showing their portrait and workplace. Photographer Marcin Gierat made use of the collodion wet-plate process, a craft printing system developed over two centuries ago. This allowed him to create an aura of humanity and craft, going deeper into the narrative of each artisan.

From carpenters to tailors, bronze workers to leather workers, each had their own exceptional story and expertise that needs to be kept alive and passed on. Here are a few of them, we chose to tell:

Dimitri Villoresi is a visionary and pioneer in the movement that goes back to true craftsmanship. He has gained his knowledge and love for leather working from various botteghe in the streets of Florence. He started creating his own bags and small leather goods in 2004. 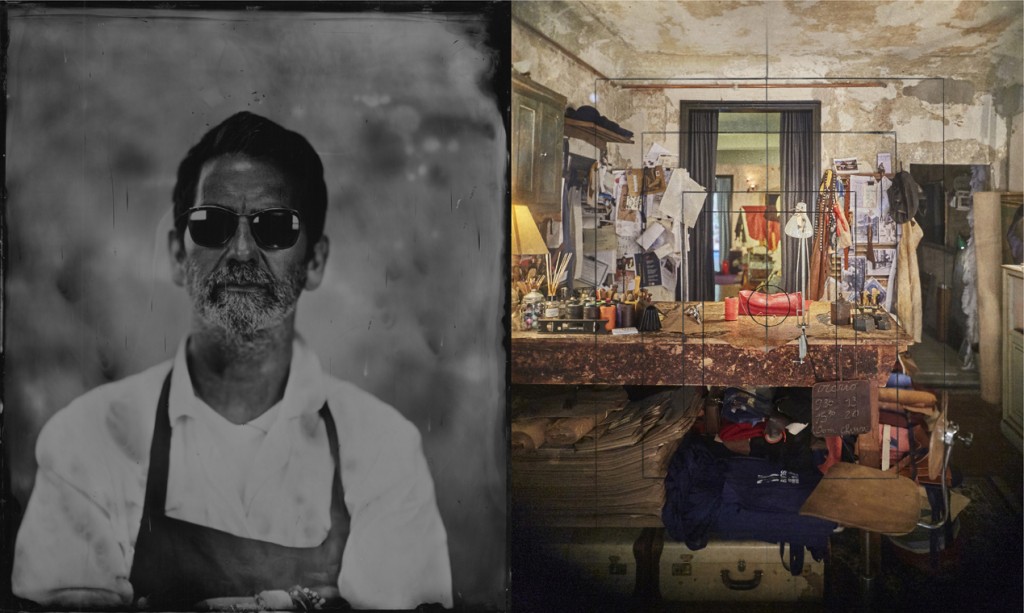 Each piece is hand-made, never using machinery, only tools such as cobblers’ knives, awls, scissors, needles and thread. Dimitri is not only a skilled craftsman but he is also a teacher and mentor. He sees it as his mission to ensure the survival of the artisanal know-how. That is why he provides individual workshops to teach the trade of leather working to newer generations.

For a fully customized and made-to-measure bag, Dimitri’s atelier is a not-to-be-missed destination.

With his upbringing amongst embroidery makers, he discovered his passion at an early age. He always enjoyed art and started studying costume history and fabrics. About twenty years ago, Gatto decided it was time to open his own workshop atelier. With this background in embroidery and the art of costume design, he became as skilled as a tailor. 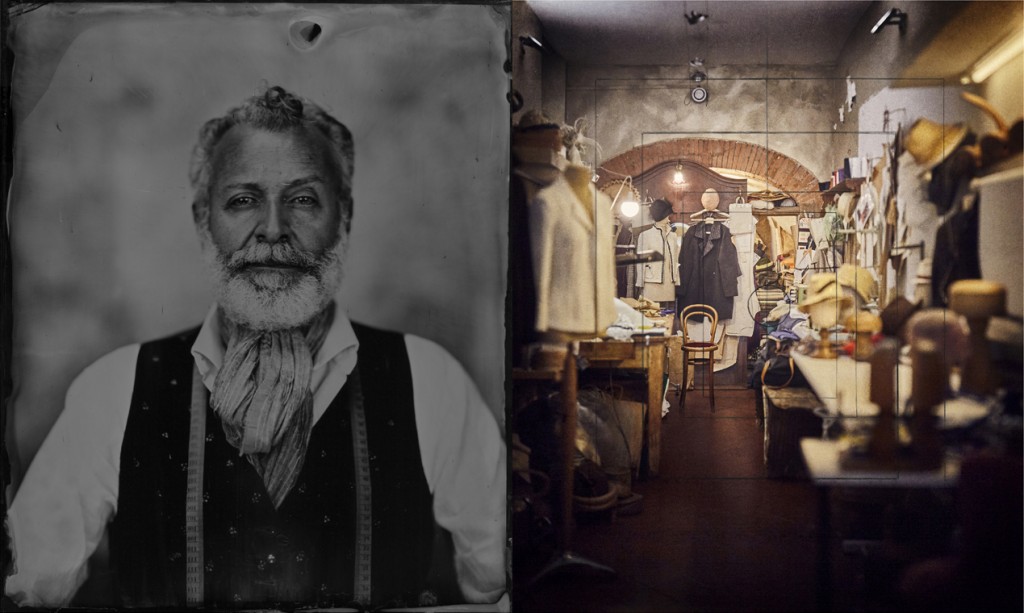 However, his true passion is his work as a Cappellaio, which means he is a master of  the craft of hat-making. He says that ‘a hat is an artwork for the head.’

Each hat he makes is a unique representation of the person who he designs it for. The wearer gives the hat purpose.

This atelier breathes the history of a modern-day guild, where master and student co-create. It all started in 1925 when Vasco Cappuccini opened his own bronze workshop and produced brass furniture items by hand. At the age of 13, Lamberto began to work for Cappuccini and took over the business in 1946. In the years that followed, Lamberto educated his son Duccio the art of working with bronze and metals for artistic reproduction of furniture, doors, frames and so on. 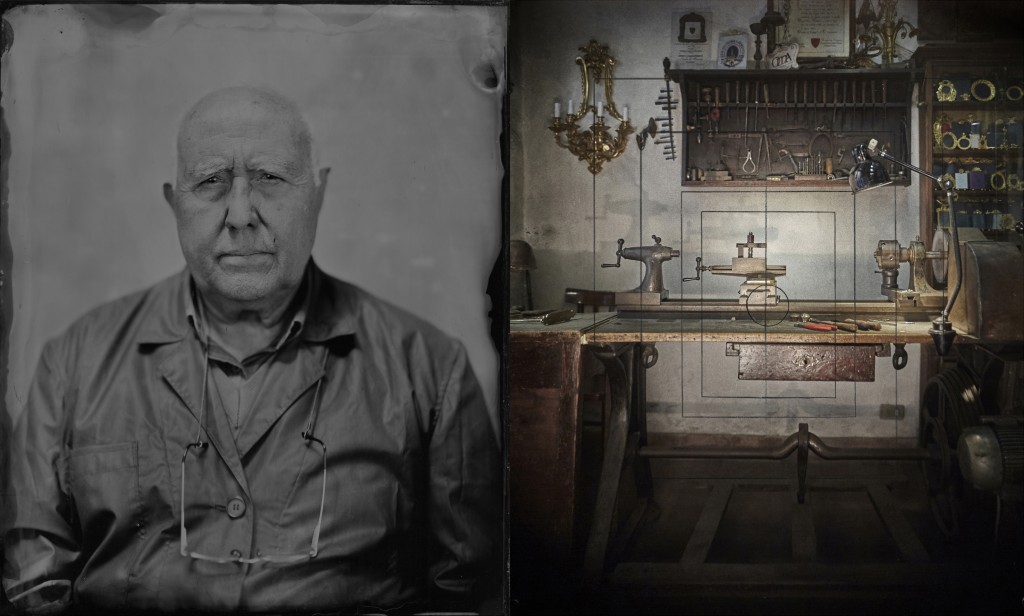 In 2008, Lamberto and Duccio received the “Bottega Artigiana Fiorentina” prize.

In 1995,at the age of 28, Roberto Ugolini opened his workshop with another Florentine artisan. Soon becoming one of the most well-known bespoke shoemakers in Firenze, he gained international recognition with a vast-spread clientele, in particular from Japan.With his growing fame, he began to pass down his knowledge to a culturally diverse team of young creatives.

Ugolini creates tailor-made shoes with prices starting from €1500 and they take approximately a year to make. This year is the first time Roberto Ugolini launched a RTW collection, offering the same level of technique and quality as of his uniquely crafted pieces. 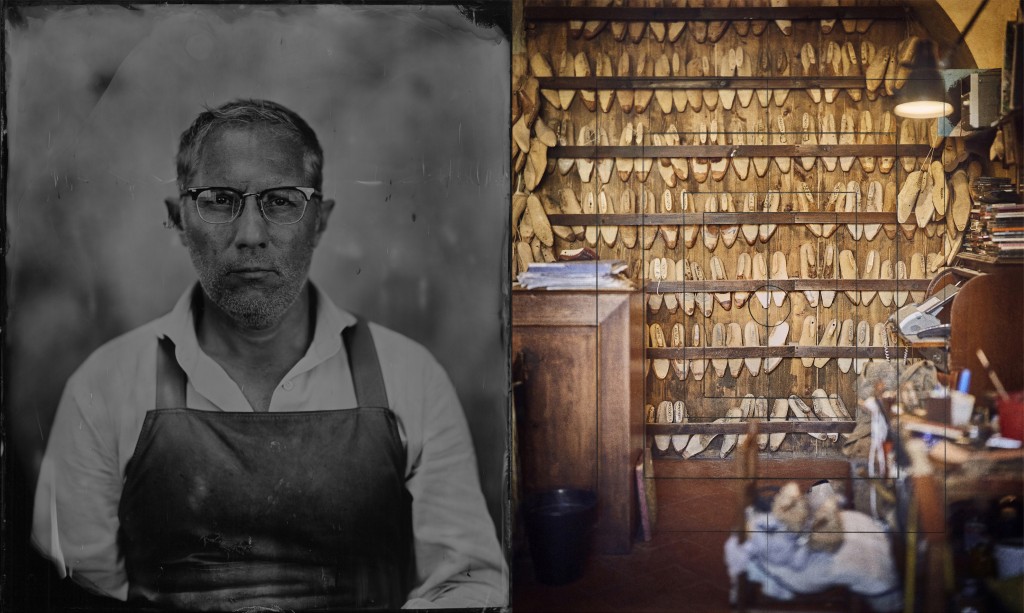 Discover the other Artisans of the Oltrarno:

Born and raised in the city of Breda, Dominique has always had an affinity for fashion, photography and writing. With a background in Cultural Sciences (Tilburg University) and Design History & Criticism (VU Amsterdam), he wrote his master’s thesis about how luxury fashion brands profile themselves online. After scavenging for fashion exhibitions in Europe, he realized that a career in fashion was his aim and moved to Milan in 2017. Here he started a Master in Fashion Management at Domus Academy where he worked on projects for renowned fashion companies such as Versus Versace, Sergio Rossi and Salvatore Ferragamo. Started as an intern for BACO, he still continues to take on freelance projects.

Last month, I took a trip to Lisbon and Porto for Portugal Fashion Week. I was struck by the rich fabrics and the overall…