MILAN–Italian rock bassist-cum-author-cum-eye wear designer Saturnino Celani’s destiny was pretty much mapped out in the stars when he was a little boy growing up in the medieval Eastern Italian town of Ascoli Piceno, aka “The City of 100 Towers.”

With bells constantly tolling, it is no surprise that at only five years old, he began playing the violin. At 14 years old, he discovered the bass guitar and even earlier than that, he developed an affinity for glasses when his older sister Giovanna was diagnosed with near-sightedness. “I didn’t understand why she was allowed to have glasses and I wasn’t. I didn’t need glasses at that time, but I just got them even without a prescription,” Celani told BACO laughing.

The 45-year-old bass player (an Italian John Paul Jones of Led Zeppelin sort of guy) frequently tours the world alongside singer Jovanotti, but when it comes to his knack for fashion and his head for design, Celani is always the band frontman. His eponymous eye wear label, made by craftsmen in Cadore in Italy’s Veneto region, is on a rocketing-pace fashion trajectory. Over the last year, Celani has been touring the nation’s key fashion trade shows and recently showed at the world’s more prominent eye wear fair, Mido, in Milan this month.

With his upcoming memoir “Testa di Basso” (Head of Bass) coming out this month, Celani recognizes that his life was filled with lucky happenstance occurrences – quite a few of them connect the dots back to his childhood dalliance with the violin and the first time he spotted a local teen band called the “Spitfires.” “The violin isn’t really going to help us,” the band leader said to Celani. But as luck would have it the bassist was called up for military service and Celani got the job, showing he could play bass on the fly. “It was like taking a walk” Celani said.   The natural ease in which he learned to play the bass, is similar to his flair for eye wear, which like his rings and his leather jackets, he never leaves home without. “The greatest satisfaction is seeing someone that is wearing something that in a certain way is part of your DNA,” Celani said.

Personal Style: “For about four years, I discovered made to measure shoes and it is a great way to spend my money. I really don’t have a style. It basically depends on how I feel. I give a lot of importance to my performance presence because that stimulates me. I can get a little crazier than I normally do and so I choose more communicative pieces like leather jackets.

The Look: Bespoke shoes made by Cesare Baroli on Lake Como, his own “papal” ring made for him with his own trademark logo inspired by the outline of his own face. The ring is embedded with an onyx and was made especially for him by jeweler Veronesi on Milan’s Via del Orso. The ring is now sold and produced online by www.firstpeoplefirst.com . Part of the proceeds from the rings are donated to the Cooperativa Sociale Piccolo Principe, a charity that supports disadvantaged minors, in part by helping them find work. Diesel Black Gold jeans and jacket. 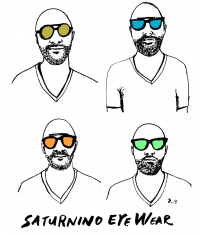 Saturnino Celani’s Trademark Logo mirrors the outline of his face.

ROME–The real protagonists of Altaroma were undoubtedly the emerging designers. Attentive to past, artistic and cultural influences, they also drove the fashion event in terms of trends…