Marrakech, Morocco–Meeting Laurence, the Belgian designer behind LRNCE is like walking into a bohemian Moroccan dream. Laurence has a sparkle in her eye, is effortlessly stylish and oozes creativity. The budding designer navigates her way around the small and winding Medina streets in her bellowing Kimono and her hands embellished with rings and tattoos.

Laurence moved to Marrakech on a whim, having finished fashion school in Gent, Belgium and completed an internship at BLESS in Berlin. After spending time helping out at a camp in the desert close to the oasis, M’Hamid El Ghizlane, she decided to move to Marrakech with her sewing machine. LRNCE was originally born in Belgium and Berlin but it is safe to say it has taken shape in Marrakech. The brand quickly grabbed the attention of the international press and continues to gain a strong following with consumers on Instagram and Tumblr.

After meeting for tea at Le Jardin, I follow Laurence to her very own Riad in the Medina. The local stall owners all recognise Laurence on our way there and greet her with smiles. Laurence’s joie de vivre and vibrancy are clearly infectious. The front door to her home is down a dark and quiet alley, but as you step inside you are faced with a riot of colour, texture, objects and warmth. Laurence has filled her riad with quirky designs and objects – either collected or made by herself. Something catches your eye in each nook and cranny. After visiting her design “office” and her own room filled with several of her own creations, we walk up to the rooftop which has a 360 panorama view of Marrakech. 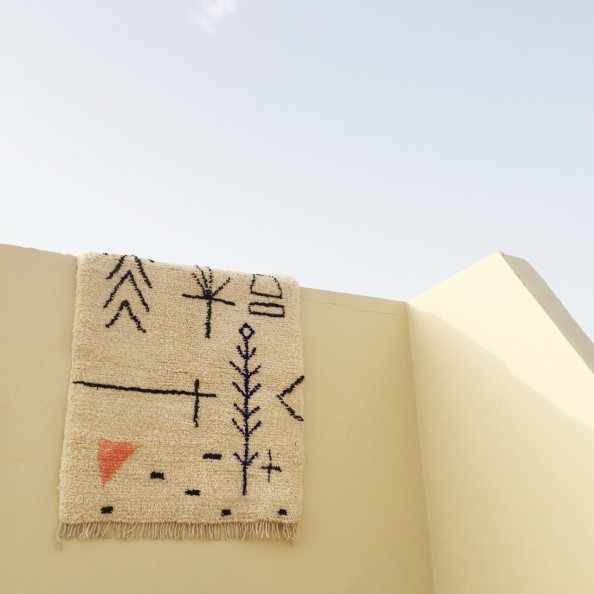 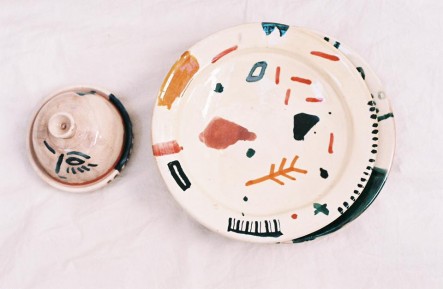 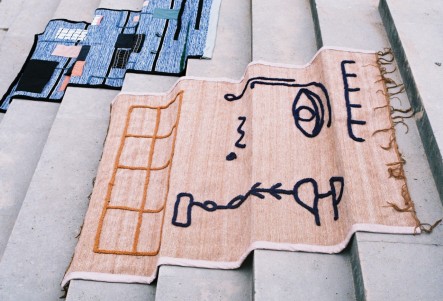 LRNCE has grown into a lifestyle brand – Laurence’s creativity stops at nothing. She has developed an array of designs for leather shoes, kimonos, carpets, pottery and bags. Laurence shows no fear at the idea of expanding her product array further and is eager to try out new mediums.

Laurence’s style sense has seen her create cool editorial shoots of her designs – all spontaneously organised with her Marrakchi crowd and friends visiting from abroad. Laurence says: “I have beautiful friends. So when they come to visit I ask them ‘Please can you wear this and we take photos.’” It is through these cool photos that she has gained such a strong following online with not only consumers but also journalists.

As an emerging designer, Laurence has played it by ear and learnt how to make the best of these opportunities when they arise. Laurence recalls a recent visit of journalists: “I had four journalists coming to visit me from magazines. I had never done this before and I felt pressure to show them everything and make sure it went well.” The journalists experienced full immersion as they stayed at Laurence’s Riad (which has been a big success on Airbnb) and visited the different artisan ateliers. 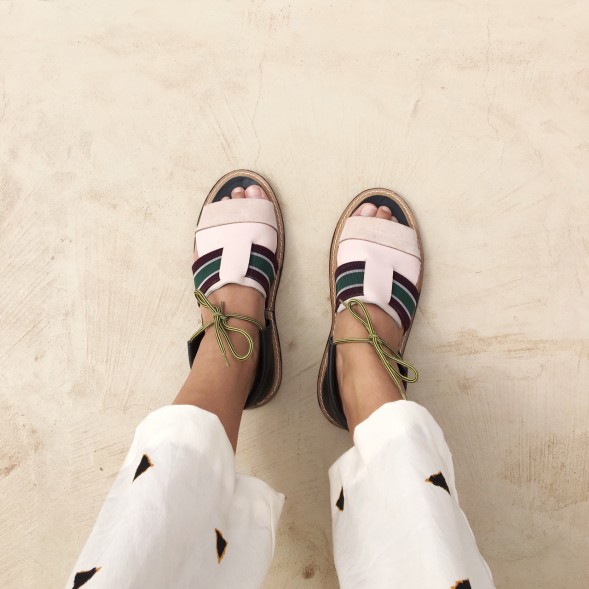 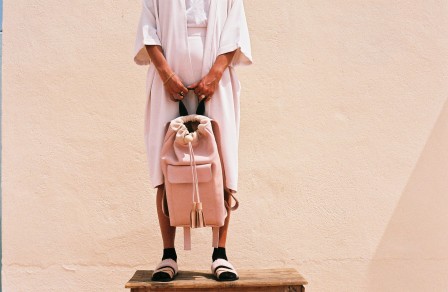 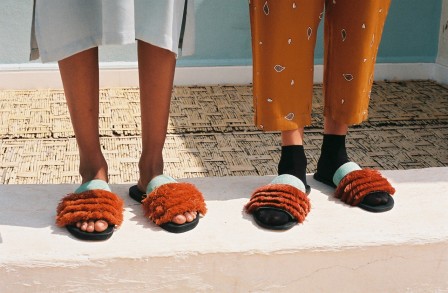 With her contemporary eye for design, Laurence brings a fresh take on artisanal skills found in and around Marrakech. Her ideas are often seen as peculiar by some of the craftspeople and Laurence has to engage in negotiations to get things made her way. Laurence is often greeted with remarks akin to “what are you wearing?” and she has had to convince shoemakers to use leathers which they don’t traditionally use to make footwear.

However, Laurence doesn’t deny that the craftsmen and craftswomen are very talented with their hands. Watching women make carpets, or men make sandals, continues to amaze her. In her time in Morocco, Laurence feels she has learnt far more than her years spent at school, just by doing and engaging directly with the artisans.

Developing her own network of artisans happened organically, often from word of mouth. Laurence points out how friendly people are here and so by asking questions, she has been recommended to different artisans. Laurence is careful in managing her relationship with her network of artisans and seems to have based them on mutual respect. Similarly to most relations, trust had to be built before they really thrived. She points out, “I think it is very important to work together with the people who produce,” and she is upfront about the fact that her handiwork is not her forte and so she relies on the hands of the artisans to execute her designs.

Laurence points out that women artisans tend to work from home, whereas the men are often the face of the craft. There also appears to be a gendered division of labour, with men engaging in leather and pottery crafts, whereas the women will weave carpets and sew.

Setting up her own business has not been without its challenges. For what Laurence may have lacked in experience, she made up with her creativity and fearlessness to take on any challenge. Her cool and contemporary creations combined with her courage and infectious happiness, are the magical ingredients that make Laurence the success she has become today.

Maryjo is a British-American that grew up in France and is now based in Geneva. Maryjo studied Human Geography at Bristol University. She gained exposure to the world of fashion after living in Milan. Initially gaining experience with wholesale teams working in fashion showrooms, Maryjo then had the opportunity to work on the fashion desk of an international newspaper before moving to Geneva to work for a UN agency. Maryjo is interested in fashion, craftsmanship, gardening, good food, languages and insider tips. She can be spotted rollerblading around town.

LOS ANGELES–With collections titled — “Your Pretty Face is Going to Hell, Arachnophobia and Black Flowers Blossom” — just to name a few, it is…