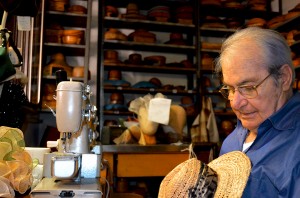 The hat is once again the most important wardrobe item.

The last time I was inspired to wear hats regularly was in the 1980’s, when sensations like the New Kids on the Block and Debbie Gibson – brought bowling hats back in vogue, just like they did the Running Man, the Roger Rabbit and the Cabbage Patch dance moves.

After seasons of runway shows and Pitti Uomos, and with mens sartorial fashion in full upswing, hats are again something more than just an occasional party favor for annual events like the Kentucky Derby, the Chelsea Flower Show or the Orticola garden extravaganza here in Milan.

In fact, hats are once again the most important item in one’s wardrobe. Not just because they are atop one’s head, but because the hat allows consumers to express their true selves without defying societal norms.

Trilbies, panamas and stockman hats are regular appearances on the streets of LA, New York and Milan and among A-list stars like Pharrell Williams and Cameron Diaz. This week, we feature real fashion icons like Luca Rubinacci, the 33-year-old style icon. The dapper heir to the legendary Neapolitan tailor, says he never leaves home without his beaver fedora, which he has crafted to magically fold and wrinkle and somehow pop perfectly back into place. We also feature a photo of Helen Nonini in Altalen’s elaborate turbans. Nonini is playing a pivotal role in ushering in the turban trend on the streets of Milan.

In addition to Altalen, we have also profiled Laura Gamba, a young, determined businesswoman who despite all odds, has risen to the occasion in order to make her family’s company, Panizza, famous once again in a modern age. And finally, Lorenzo Borghi, the 74-year-old Milanese milliner, whose hats have adorned the likes of Queen Elizabeth II.

This week, we would like to highlight that there are many talented hat makers around the world, who don’t have access to the marketing teams that some of the bigger brands do. Buying a hat from an artisan, who comes from a long line of milliners or from a small atelier that aspires to make individualized art for the head, is making an investment in something that will last throughout the generations.